Home > Gifts For Pets > Buying Toys for Your Dog

Buying Toys for Your Dog 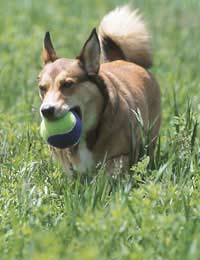 Dogs love to fool around. Whether it’s on their own or with their owners they love to run and jump and generally lark about. So why not buy them some exciting toys to make larking about even more fun for them? We all know they like sticks, toy bones and throwing discs, but why not try something a little different to liven up their playtime even further?

Most dogs would probably prefer a real chicken to attack during those boring walks with their owner, but it’s just not deemed socially acceptable at most local parks, even amongst canines. This explains the invention of the rubber chicken, which continues to provide endless fun for dogs across the world, as well as for any humans watching, as their pet desperately tries to throttle a lifeless piece of squeaking plastic. Rubber chickens are low in price and available from most good pet stores.

There are a variety of toys for dogs that won’t just test the power of their bite, but the power of their brain too. Not quite as complicated as your average sudoku, most of these brain games are based around your pet simply sniffing out a hidden treat and then retrieving it from inside some kind of odd contraption. Nevertheless, they will provide hours of fun for your pet and should theoretically improve their problem solving abilities too. Let’s just hope they don’t figure out how to use your credit card or commandeer your car. Several of these pet brain games are also aimed at cats and parrots too, meaning you can even pit your pets against each other in a battle of animal minds.

If your dog isn’t quite up for brain training and prefers to dopily chase and stare at bubbles instead, then try out a bubble gun as a gift. Not only will this toy entertain your pet with its endless streams of shiny bubbles, but it should appeal to his sense of taste and smell too. The bottle of bubble mix is flavoured with sizzling bacon, which as we all know, tastes a lot better than soapy water, and will make your dog extra eager to catch those mysterious round things that keep appearing in front of him. Bubble guns come with batteries included and even won an award for Best Innovation at the 2006 GLEE Show. At less than a tenner, they make a fantastic toy for dogs, and humans alike.

This is another toy intended for dogs that, in reality, probably provides a lot more amusement for their owners. It is essentially a rubber chew toy shaped like a giant tongue, which makes your dog look like a ridiculous cartoon character when held in its mouth. They come in a variety of sizes to suit different breeds of dog, meaning that before long there won’t be a single dog left in the country with a shred of dignity left. This is a great, fun toy and is very reasonably priced considering the amount of amusement there is to be had from it.

Ever wished you could throw that ball a little further when playing fetch with your dog? Well, now you can. Ball launchers allow you to hurl a ball 2 -3 times further, which means your dog has to work harder and therefore gets more exercise, while you put in even less effort than before. They also allow you to pick up the ball without having to lean down or get covered in mud, making this a winner for both canines and owners. For less than £5, it’s an essential toy for all those overly energetic dogs with slightly lazy owners.
Next Page

Buying Treats for Your Pet